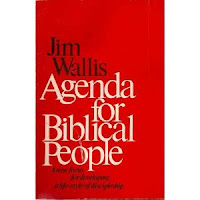 Jim Wallis is a bestselling author, public theologian, speaker, and international commentator on ethics and public life. He serves as the chair of the Global Agenda Council on Faith for the World Economic Forum. President and CEO of Sojourners, Wallis contributes columns in The New York Times, The Washington Post, Los Angeles Times, and The Boston Globe. He teaches a course at Georgetown University and lives in Washington, D.C. with his wife, Joy Carroll.

The Sins of Prosperity

In the wake of victory in World War II, the United States encountered unprecedented prosperity. Of course, the menace of communism loomed in the distance, but the economic boom after World War II led the United States to a position of leadership in the world. While many Christians uncritically accepted good fortunes, some began to seek the root causes of American prosperity. In particular, Jim Wallis became an outspoken promoter of a refocused Christian discipleship that recognized the institutional sin of the United States and engaged in solidarity with the poor. With Agenda for Biblical People, Jim Wallis outlines a counter-cultural way of Christian life.

Decidedly evangelical, Jim Wallis begins Agenda for Biblical People with Scripture. Beginning in the 1920s, Protestantism saw a schism between liberalism and fundamentalism. On one side, the collective aims of the social gospel movement resulted in a de-emphasis on personal salvation. On the other side, the desire to lead a pious life worthy of eternal salvation forged a neglect for worldly aims supposing that earthly endeavors carried little everlasting significance. Jim Wallis, however, refuses to recognize this schism. He writes,

“The proclamation is not a personal gospel, not a social gospel, not even a gospel of ‘both,’ but rather the gospel of a new order and a new people. The evangel is not merely a set of principles, ethics, and moral teachings. It is about a Person and the meaning of his coming” (16).

To Wallis, the quibbles between liberal and conservative theologians regarding the nature of the gospel constitute a fight between parties for an interpretation that best fits a worldview. Instead, Wallis contends that a focus on Jesus will orient our social and eternal agendas.

Aligning with the Poor

Having presented the case for a Christ-centered gospel, Wallis contends that Jesus, in particular, and the gospel, on the whole, are both in favor of the poor and in opposition to the rich. Wallis simply states,

“To live in radical obedience to Jesus Christ means to be identified with the poor and oppressed. If that is not clear in the New Testament, then nothing is” (94).

The Jesus observed in Scripture aligns with the poor. Therefore, for a Christian seeking a Christ-like life, similar alignment with the poor must become realized.

Sadly, American citizens in the 1970s during the period of this book—and arguably even more in present times—were addicted to consumerism and in favor of a capitalistic process that exploited poorer nations. Wallis notes,

“We are finally coming to understand a discomforting but central fact of reality—the people of the nonindustrialized world are poor because we are rich; the poverty and brutalization of the wretched masses in maintained and perpetuated by our systems and institutions and by the way we live our lives” (84).

As such, American Christians act decidedly “un-Christ-like” when they promote the practices that exploit the poor.

Christians, then, need to break from this cycle in order to affirm the radical notions Jesus presents in the gospel. Wallis ponders,

Clearly, the gospel promotes a lifestyle in discordance with American culture and a laissez-faire marketplace.

As a remedy, Wallis suggests that the church act as a revolutionary counter-cultural community. Wallis contends,

“The Christian community is the ultimate parallel institution, a group within a society constantly confronting all other groups with models of life and hope while demonstrating the possibility of human community” (135).

The church, then, functions as an alternative to the powerful institutions of culture. Within a community, Christians find the solidarity necessary to seek justice for the poor and oppressed. With the early Christian community in the book of Acts as an example, Wallis believes that Christians can unite in order to break the trends of consumption, share everything in common, promote justice for the poor and exploited, and break in the Kingdom of God.

For Wallis, the time of uncritically accepting the position of the United States in the world is over. He rightly argues that Christians ought to situate their gospel around Jesus Christ. As a promoter of the poor and oppressed, Christians must realize that the institutions that comprise the United States serve to exploit and afflict. As such, Christians must form counter-cultural communities that function in alignment with the poor against oppressive institutions. Agenda for Biblical People is challenging in our current context. To remain true to Scripture, one must take into account the life-altering example of Jesus. If you are interested in Christian living and a critical look at American culture, Agenda for Biblical People is for you.