John Grisham (b. 1955) is a well-known author, recognized for his law novels. He attended Mississippi State University and the University of Mississippi School of Law. His best seller is The Firm, which sold more than seven million copies and was adapted into a movie. Though Grisham became a lawyer and novelist, his childhood dream was to become a baseball player. Grisham lives with his wife, Renee, and their two children, Ty and Shea, on a farm in Mississippi.

In my hometown of Seattle, we try to be baseball fans. Unfortunately, as of late especially, the game has not been boding well. The excitement of meaningful baseball has disappeared. In 1995, the Seattle Mariners won a division championship, and even defeated the New York Yankees in the American League Division Series. In 2001, they won 116 games, setting the record for most wins in a single season. But, despite successful seasons and great moments, my beloved Mariners have never been to a World Series, and have, to say the least, been in a slump for some time now.

Despite the lack of excitement Mariners fans feel, there is no doubt why the game is America’s pastime. Baseball holds great anticipation and excitement, with many surprises intertwined. John Grisham captures this excitement well in his newest novel, Calico Joe, one of Grisham’s novels which, thankfully, doesn’t revolve around the law world. The novel centers around Joe Castle, a rising star in the baseball world, and Warren Tracey, a jerk of a man. Both are competing in rival teams in a nail-biting pennant race. 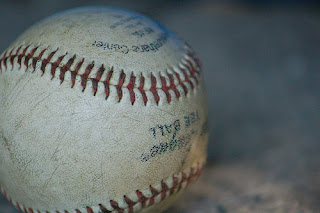 1973, a year of splendor for baseball. The National League East has six teams contending, and due to an injury, the Cubs add a minor leaguer to the roster named Joe Castle, from Calico Rock, Arkansas. Joe immediately sets records, and leads the Cubs to the top of the division. He even hits three home runs in his first three bats.

“As stunning as his first three at bats had been, Joe’s fourth would endear him to baseball purists forever. Top of the ninth, score tied 6-6, two outs, Don Kessinger standing on third, a tough right-hander named Ed Ramon on the mound. As Joe stepped to the plate, a few of the eighteen thousand fans clapped politely, then an odd silence settled across Veterans Stadium. Ramon’s first pitch was a fastball on the outside part of the plate. Joe waited, then whipped his bat like a broomstick, crushing the ball and lining it a few inches outside the bag at first base, a foul ball, but an impressive one nonetheless…The second pitch was a changeup, high. With the count 1 and 1, Ramon tried another fastball. As soon as he released it, Joe hesitated a split second, then broke for first base with his bat trailing. It tapped the ball slightly and sent it dribbling toward the second baseman…Players from both teams looked on in disbelief. With a chance to hit four home runs in a game—a feat baseball had seen only nine times in a hundred years—the kid chose instead to lay down a perfect drag bunt to score the go-ahead run” (11-12).

The Sins of a Father

Castle then meets up with pitcher Warren Tracey, whose son is the book’s narrator. Warren pitches for the New York Mets, and simply put, is a jerk. Warren abuses his family, drinks constantly, and chases women. He also made his son hate both him and the game of baseball.

“For me, baseball was a joy to play when my father wasn’t watching. Because of his schedule, he rarely had the chance to see my games, and that was an indescribable relief. When he was there, though, I had no desire to play. He would lecture me on the way to the park, snarl at me during the game, and, worst of all, berate me all the way home. He even slapped me once as soon as we were driving away from the field. From the age of seven, I cried after every game my father saw me play” (16).

When Warren meets Joe Castle in Shea Stadium, Joe hits a home run against him. The next time Joe is at bat, Warren intentionally beans the rising star, hoping to humble the rising star. Joe Castle’s career is instantly ruined, as the bean ball careened towards and struck his head dead on. With his career over, Joe drifts back home to Calico Rock to work as a groundskeeper, now partially paralyzed and speech impeded.

Decades later, the narrator learns of his father’s immanent death due to pancreatic cancer, and goes to Calico Rock to find Joe Castle, hopefully to encourage his father to repent for ruining another man’s life.

“‘[B]efore he’s gone, I would like for the two men to have a word.’‘What kind of word?’‘I’m not sure, but ideally I would like my father to apologize.’‘Have you discussed this with your father?’‘No, not yet, and before I do, I need to know if Joe will agree to a meeting.’‘I doubt seriously if that can happen, Paul. And it would be a huge mistake for Warren Tracey to show up here in Calico Rock. That could start some serious trouble’” (76).

John Grisham is a wonderful storyteller. Branching off from his law world, he writes a gripping tale, combining both baseball and repentance. Even if you’re not a fan of baseball, or root for a rarely-winning team like the Seattle Mariners, Calico Joe is a good read for you. Grisham develops the storyline well, gets you into the character’s heads, and provides pseudo-Hallmark moments. It’s a quick read, and I’m sure you’ll enjoy it.


Have you grown tired of Grisham’s law novels?  Do you enjoy his writing?  Have you read this book and found it to be exhilarating, or just ridden with Hallmark moments?  Share your thoughts below.
—
Posted by: Andrew JacobsonAffiliate Links: