Kate Beaton was born in Nova Scotia, and has a degree in history and anthropology from Mount Allison University. She publishes a new comic to her website about once a week.

Call me pretentious, but I don’t do the whole graphic novel/comic book thing. It conjures up images of greasy-faced nerds with coke-bottle lenses eating potato chips, their mom doting on them, hand and foot, while they play another “fascinating” game of Dungeons and Dragons. Literary supremacy it most certainly is not. But, an English-teaching friend of mine instructs a graphic novels course. Upon learning of this course, I figured if it’s good enough to be taught at school, I might as well give it a shot. Hark! A Vagrant has been getting a lot of hype in the press lately, so I thought I’d check it out.

Having read the book, I face the hard truth: I liked Hark! A Vagrant quite a bit. I probably liked it because of its satire, the purpose for which the graphic novel was intended. In the introduction to the book, the author states,

“I think comics about topics like history or literature can be amazing educational tools, even at their silliest. So if you learn or look up a thing or two after reading these comics, and you’ve enjoyed them, then I will be pleased” (5).

History and Literature Made Fun!

Historian-turned-comic-cartoonist Beaton presents a giddy romp through history in a Monty Python-esque nature that is silly to its core. The comics she writes are nonsensical, and yet at the same time somewhat educational. To give some sense of connectivity, I’ve kept the review only circulating around The Great Gatsby, but there’s more comics circulating around literature, general culture, and history. Here’s an example from page 154 of the book. 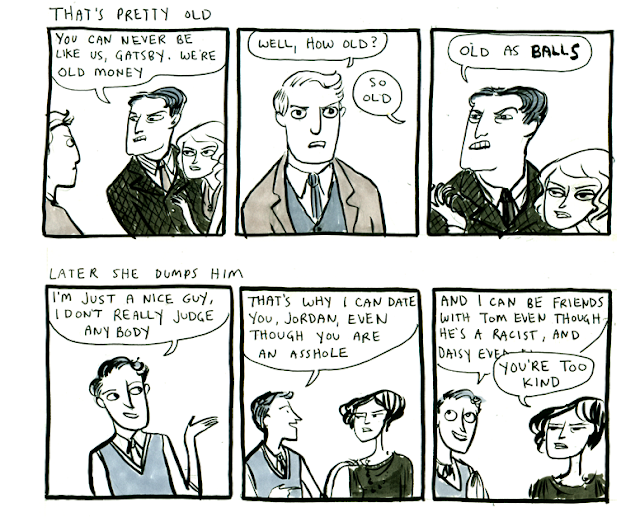 I think that comic gives you an idea of the content within the book. There’s no real plot, but there is a theme: history and literature constructed in pretty laughable and interesting terms. She also offers author’s commentary throughout the book, providing a generous backdrop to her comics. On the following comic, she writes,

“Everyone has had to read The Great Gatsby in high school because it’s the best example of constructing a novel with themes and symbols, like legos, only not legos but The American Dream and the eyes of Dr. T.J. Eckleburg. Fifteen-year-olds can really get behind an essay on what the green light means, which is good, because they sure as heck won’t relate to any of the characters, who are all huge jerks with enough money to be wasted most of the time on top of being miserable” (151).

Give it a Try

Hark! A Vagrant changed my mind about comics and graphic novels. I learned through reading it that there is some satire, humor, and intellectual benefit from some comics. Much like anything else in life, hasty generalizations don’t work. So, to my nerd friends, I apologize. I sincerely recommend you either check out her website (which has all these comics available) or purchase the book. It’s great for a laugh.