I’m a newlywed, and happily so. As I write this, I’m still in my first year of marriage, nearing my one-year anniversary. Truthfully, being married (to my wife, anyway) is absolutely wonderful. We’ve had a few hardships, but not many in the scheme of things; my wife and I have been blessed in this regard. Some marriages, however, encounter great hardships in their first few years. Many friends of mine have told me “the first year is the hardest”. Thankfully, I haven’t found that to be the case.

In The Newlyweds, Nell Freudenberger tells the story of a Bangladeshi Muslim who marries an engineer from America after they meet on an online dating website similar to eHarmony. It’s not exactly a stereotypical love story. Fruedenberger explores the themes of a new marriage and the hardships within, but she also navigates cultural differences in somewhat similar vein to The Namesake by Jhumpa Lahiri.

Amina, the main character, is based loosely off of a woman that the author met on a flight from New York City to Rochester. In an interview with the Chicago Tribune, Freudenberger states, 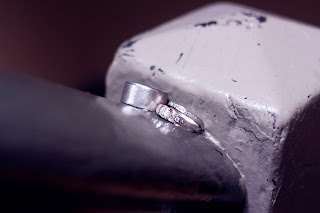 “I found myself sitting next to this young woman and I was curious about her and her husband, who were holding hands…When I heard her story that they had met on this international marriage brokerage website I was so curious, and thought what a different courtship that is from mine. I started to think about what it would be like for her to leave Bangladesh for the first time to come to Rochester to live, and I couldn’t get it out of my head.”

Resulting in The Newlyweds, a study emerges in how a couple’s unmentioned expectations can develop in a marriage and separate them over time. At first, everything is bliss, and Amina is thrilled.

“She hadn’t believed there was a man on earth—much less on AsianEuro.com—who would satisfy all her mother’s requirements, but George came very close” (14).

Half arranged marriage and half mail order bride, Amina maintains uncompromising ideals of how the marriage should work. She is fighting for both her mother’s expectations and her own, chief among which is the goal of bringing her parents to America to live with the newlyweds. George, her husband, has his own motives and ideals about the marriage—sex, money, and practicality in general.

Despite the noticeable friction in the marriage, the first part of the novel has a very sweet undertone to it, aligning very close to what one might call “the honeymoon phase”. Soon, things start to unravel, and unmentioned dark truths begin to emerge in the marriage.

“If these numbers were correct, Kim had gotten pregnant in February of 2004—right here in Rochester. A month later, George had decided to buy a three-bedroom house in a genteel suburb known for its excellent school district. He had moved in immediately…” (142).

With no intent of prying into her husband’s life, Amina soon discovers that George was once in a relationship with her friend Kim, and he had impregnated her during their courtship on AsianEuro.com.

As a result of learning this truth, Amina struggles with how to be a good Banladeshi wife in an American culture. She discovers how little she and George have in common, and is now caught between his expectations and her family’s. How Amina will navigate the choppy waters of marriage becomes the question of the novel.

The Newlyweds not only captures the duality of being newly married, both pain and bliss, but also the tension of being pulled between two cultures. Overall, the book seems to say more about cultural differences than marriage in general, ignoring the larger narrative of enjoying life together. Perhaps, in the end, Freudenberger is stating that marriage is worth saving, yet is also something that must be persevered through. Perseverance is a character quality that is often ignored in this American culture, and conceivably is a point that Freudenberger is trying to get across amidst the battle of cultural differences.
Wonderfully crafted, The Newlyweds carefully explores the culture of the newly married and the culture of different nationalities quite well. It’s worth a read.
Verdict: 3.5 out of 5
What do you think? Did you enjoy the novel and Freudenberger’s concepts of a culturally divided marriage? Share your thoughts below.
—
Posted by: Andrew Jacobson
Affiliate Links: