Cormac McCarthy was born in Rhode Island in 1933. One of six children, Cormac’s family moved multiple times in his childhood as his father accepted different occupations. In 1951, McCarthy attended theUniversity of Tennessee majoring in Liberal Arts. Midway through his studies, McCarthy served in theAir Force for four years. After his service, McCarthy returned to college, writing his first short stories. In 1959 and 1960, he won the Ingram-Merrill Award for Creative Writing. Mccarthy’s first novel, The Orchard Keeper, was published in 1965. Several years, grants, and fellowships later, McCarthy published Suttree, Blood Meridian, and All the Pretty Horses marking his rise in literary acclaim. McCarthy is widely considered one of the great modern American authors and many of his works have been translated to film.

In The Road, Cormac McCarthy explores the idea of innocence, good and evil, and the idea of “carrying fire”, where he explores innocence and human resilience. Unlike so many dystopian novels that merely explore what humanity’s darker sides are, McCarthy uses the harrowing and depressing post apocalyptic landscape to ultimately show the brilliance of the human spirit.

The Road opens in a post-apocalyptic world which sees humanity reduced to its most basic elements. A never named father and his son journey across the landscape.

“He’d had this feeling before, beyond the numbness and the dull despair. The world shrinking down about a raw core of parsible entities. The names of things slowly following those things into oblivion. Colors. The names of birds. Things to eat. Finally the names of things one believed to be true. More fragile than he would have thought. How much was gone already? The sacred idiom shorn of its referents and so of its reality” (88).

Filled with ash and devoid of any living animals and vegetation, many humans have resorted to cannibalism or committed suicide. The boy’s mother gave up after the disaster and evidently committed suicide before the story begins. The more sophisticated elements of human civilization have been obliterated, but perhaps more importantly concepts such as altruism or the ability to hope no longer exist. The boy, however, is told to carry “the fire” by his father, a concept developing throughout the book. 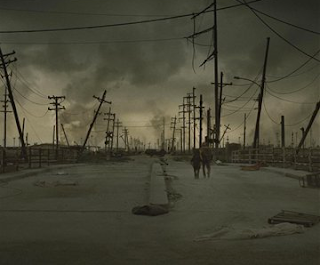 In Starkian fashion, the man realizes winter is coming, and decides to take the boy south, where it’s warmer. The father is sick, coughing blood occasionally, but continues south with his son, hoping to get him to where it’s warm before he dies. The father’s love for his son is incredibly deep. He vows to take care of his son no matter what.

“You wanted to know what the bad guys looked like. Now you know. It may happen again. My job is to take care of you. I was appointed to do that by God. I will kill anyone who touches you. Do you understand?Yes.He sat there cowled in the blanket. After a while he looked up. Are we still the good guys? he said. Yes. We’re still the good guys.And we always will be.Yes. We always will be.Okay” (77).

The father, carrying a pistol with only two rounds, killed one of the cannibal attackers on their journey. He justifies the killing as a sacrificial act, but a difference in innocence begins to emerge. The father doesn’t doubt they are the “good guys”, but conversely the son wonders having murdered someone if they can truly be considered “good”. The father wants to protect his son at all costs, but with the new world in which he lives, the rules of good versus evil have changed, morality is different, and he struggles to transform with the times, finding himself an alien in this new hopeless landscape. 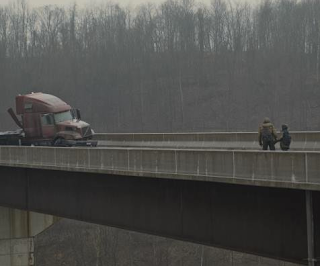 The Road is one of the darkest most hopeless books I’ve read. Perhaps showing a bit of McCarthy’s philosophical stance on human life, the book serves to tell of how humans will always strive for hope, to carry the “fire” (as McCarthy puts it in the novel) of humanity’s greatest achievements forward. But, the universe is indifferent. In the wake of the unnamed calamity, the earth has left humanity no foreseeable future. But, despite the universe’s disinterest, life goes on.

“He walked out in the gray light and stood and he saw for a brief moment the absolute truth of the world. The cold relentless circling of the intestate earth. Darkness implacable. The blind dogs of the sun in their running. The crushing black vacuum of the universe. And somewhere two hunted animals trembling like groundfoxes in their cover. Borrowed time and borrowed world and borrowed eyes with which to sorrow it” (130).

The boy and the man still carry the “fire”. The fire isn’t literal fire to survive with, but a symbol of hope and human resilience. The man consistently tells the son to carry the “fire”. No matter what horrors they encounter, the boy never desires to hurt others, and through his innocence, protects the human condition. People will always carry the fire, but sadly, far too many people choose self-preservation at the cost of genuine love and concern for others. Our world is more complex than the one in which the boy and his father live, but this truth remains the same: the fire of human compassion is too easily lost. McCarthy seems to argue that innocence is the only thing that can preserve it. His characterization of the boy is an attempt to show that innocence in the juridical sense is one of the most important human attributes. Though The Road is dark, hopeless, harrowing and depressing, the truth extrapolated from the text is worth a read.


What do you think?  Do you enjoy post-apocalyptic novels, and do you find this one to be different?  Is innocence one of the most important human attributes?  Did you find The Road to be hopeless? Share your thoughts below.
—
Posted by: Andrew JacobsonAffiliate Links: Powells Indie Bound Amazon.com