Water for Elephants: A Novel

by Sara Gruen (Chapel Hill: Algonquin Books, 2006. 350 pp)
A Canadian-born dual citizen, Sara Gruen lives in North Carolina with her husband and three children. With a background in technical writing, Gruen is a devoted animal lover who has written numerous books dedicated to the relationship between animals and humans. While Water for Elephants tops the best-seller list, Gruen’s books also include Riding Lessons

, and The Ape House

Water for Elephants follows the life of Jacob Jankowski, an almost Ivy League educated veterinarian working in the Depression era circus industry. Although Jacob intended to follow in his father’s footsteps as a small-town veterinarian, an unfortunate accident left him orphaned and unable to afford his final classes.
With no hope for a future and an empty wallet, Jacob jumps on the circus train hoping for a fresh start. After he’s hired, Jacob finds himself immersed in circus culture befriending a motley assortment of characters. As the story unfolds, Jacob begins to fall in love with Marlena, a circus performer and wife of Jacob’s tumultuous boss, August. Despite attempts to curb these feelings, Jacob’s desire for Marlena unfolds a narrative of danger and intrigue.

The Great Depression: Where Sin and Whiskey Flow

The setting of Water for Elephants reminds me of the HBO show, Carnivale

. From bootlegged whiskey to morally dubious characters, Gruen creates a gritty circus world. Most of the plot movement surrounds the circus train as the show travels from one city to another. In turn, the activity in the book includes the sights, sounds, and dangers of a moving train. I felt the rhythmic clatter of the rails and the dark, forested oblivion merely a stone’s throw from the track.

Even though Gruen successfully transported my mind into the Great Depression circus business, I found a few elements lacking. First, the portrayal of the inevitable conflict between Jacob, Marlena, and August never convinced me enough to take a rooting interest in the matter. As the story unfolds and couples fall in and out of love, I hardly cared. Of course, Gruen carefully points the reader toward the protagonist and against the antagonist but it always seemed forced, as if the story had to be written the way it was. In other words, where I wanted to be surprised, I found a formulaic love story. 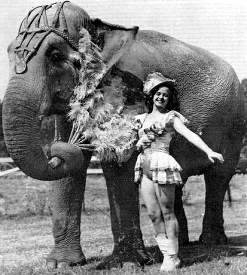 Second, Gruen employs a dual narrative where the reader follows the story of Jacob in the Depression era and the modern, 90 or 93 year-old Jacob living in a nursing home. As the book unfolds, I became increasingly annoyed with the “cut-away scenes” in the nursing home. Not only is 90 year-old Jacob crotchety and annoying, but also these cut scenes broke apart an immersing story with excellent flow.
Water for Elephants

is an entertaining-but-flawed read. The carefully researched depiction of the circus industry truly immerses the reader in an historical setting, yet the narrative teeters on the cliff of a formulaic love story and the scenes with the 90 year-old Jacob hinder the flow. Nevertheless, the book entertained me and I recommend it to those interested specifically in the dirty and gritty stories of the Depression era circus industry.