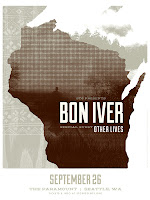 I’ve been to three concerts lately where the opening act is just as good, if not better, than what I came to see. This phenomenon certainly rang true when Bon Iver came to town. His opening act was Other Lives. Like most opening acts, I was incredibly skeptical at first. But, soon a voice akin to Brandon Summers (frontman of Helio Sequence), with complex instrumental melodic lines intertwined with atmospheric bliss changed my mind.
The band is a Sigur Ros LP and a Godspeed You! Black Emperor album all rolled up in one. Unlike Sigur Ros (or Bon Iver for that matter), the lyrics are actually aurally intelligible.
I immediately swam through the crowd and bought the album the second they ended their set. I strongly suggest you do the same.
Bon Iver Has Arrived!
Jutsin Vernon (the principle songwriter for Bon Iver) has hit the big time with a crazy light show combined with an amazing sound engineer – props to whoever mixed the house and whoever designed the lights.

Coming from such an intimate first album, the highly produced sophomore release has somewhat shocked me. The band has quickly evolved into production for the masses, and I think that this new album (self-titled  Bon Iver) is perhaps better than the first. It is difficult to not be better with the amazing musicians and talent with which Vernon has surrounded himself.
Don’t Rush!

When playing music, don’t rush. Please. It is my simple plea; lay off the coffee, or grab a glass of wine before the concert. Do whatever it takes to move every song down at least 10 BPM. Sadly, Bon Iver often rushed its songs. I know concerts are exciting, and it must be a thrill to play for a packed Paramount Theatre, but I want something I can bob my head to. I want something I can tap my feet to. On record, Bon Iver provides that; live, it should do the same.
Music is wonderfully articulated melodic lines; it’s relaxing nuanced introversion. When I can feel whiplash when I bob my head, I think it’s sped up too far. However, if rushing is my only complaint, I think a concert can be a success.
Energy

And it was a success! Bon Iver played the hits. Vernon played the crowd. You could feel the electric energy back in the nose-bleeds, where, sad to say, I resided. The last concert I went to at the Paramount, I couldn’t say I felt the energy. But, Vernon and friends put on an absolutely amazing show. I sincerely hope they come to town again – and I get better seats. But, it is my fear that as this band gets more popular by the day, my dream for a seat up close may be a lost cause. If Bon Iver tours in your town, I recommend that you buy a ticket and enjoy the show!