When one labels something romantic, the modern mind conceives its definition as love, relationships, and happy endings. On the other hand, the 19th century conception of Romanticism espoused in symphonies, ballets, and stories exhibits deep-felt emotion such as love, suffering, anxiety, and death. The conception of romanticism illustrated in Black Swan resembles the classical sense of the word pointing the viewer to deeply rooted emotions and actions. Similar to previous psychological thrillers directed by Aronofsky such as Pi and Requiem for a Dream, Black Swan dives into themes of paranoia, schizophrenia, and ballet.

The film follows a brittle and timid ballerina named Nina Sayers (Natalie Portman). The beginning of a new ballet season provides artistic director Thomas Leroy (Vincent Cassel) with reason to insert fresh blood in the role of prima ballerina for Swan Lake. Obsessed with dance and influenced by an over-controlling mother, Nina is primed for obtaining the headlining position. The lead role in Swan Lake necessitates a performer capable of elegantly dancing the part of the white swan and sensually dancing the part of the black swan. In Nina’s case, her precise moves and shy demeanor represent the white swan well. Yet, her timidity poorly translates to dancing the part of the black swan. 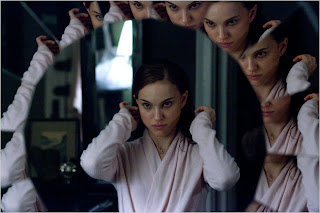 Furthermore, a new dancer named Lily (Mila Kunis) perfectly assumes the dark and sensual character of the black swan. This competition for the prima ballerina role forces Nina to channel a dark and wild character contrary to her personality; one that threatens to consume her. As the movie unfolds, Nina Sayers spirals into darker corners of her psyche believing that everyone is her enemy scheming to ruin her.

Be You Warned, It Is Suspenseful

Black Swan is brilliantly written, acted, and directed. While slightly and, more than likely, intentionally annoying, the timidity of Natalie Portman’s character is believable and renders the psychological aspects of the movie into reality. The film pushed me to the edge of my seat through impressive visuals, intense dialogue, and suspenseful scenes.
Impressively, Aronofsky craftily weaves humor into the story allowing the viewer to never fully be consumed in the darker themes of the narrative. These brief moments of levity supply the viewer with a counterbalance to some grisly images and suspenseful scenes almost fitting for horror genres.
Ultimately, Black Swan

fits into classical romanticist models of story-telling. Instead of a straight-forward story with a happily-ever-after ending, Black Swan portrays the emotions reserved for the deepest depths of the soul. I wholeheartedly recommend this movie.