The Past Events of a Suffering Family

Although I rarely discuss it, I lost my older sister when I was nine years old. Due to complications at her birth and negligent medical practice, she ended up brain damaged and bed ridden for her short life.
Such a loss changes you at the core. Honestly, I think I was young enough to not fully understand the ramifications, but I see how the event has changed me. In many ways, I’m the oldest child and have assumed all the stereotypes involved with that title. Yet, biologically, I am a middle child. Even more, as I grow closer to new friends and acquaintances, the time inevitably comes when I must explain that I had an older sister.
I remember, for years, how difficult it was for my parents to function on her birthday. Since she died during the Christmas season, our holiday festivities carried an added weight of a missing family member. While losing a sibling is difficult, the loss of a child is beyond my comprehension.

Spiraling Down the Rabbit Hole 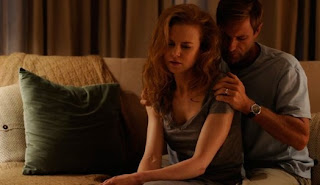 At its core, Rabbit Hole focuses on the acute suffering felt by parents who have recently lost a child. Becca (Nicole Kidman) and Howie Corbett (Aaron Eckhart) find themselves at a crossroads. With the death of their four-year-old son lingering, everyday tasks carry immense weight. Understanding the importance of distance in grief, their friends are unsure about when to reconnect. The neighbors extend grace through invitations to shared meals but the thought of rehashing feelings to another individual is like reliving a horror movie. Becca’s mother, Nat (Dianne Wiest), attempts a route of understanding since her son – and Becca’s brother – died of a drug overdose in his early thirties.

In separate ways, Becca and Howie try to medicate the pain. Howie believes that a support group provides the answer to their problems. Amongst a group of understanding peers, Howie has faith that healing will come quickly. In the privacy of his home, Howie replays on his smart phone, the only video left of his son, holding on for dear life that last glimpse of the joy of his offspring.
Becca, however, believes that her suffering is exclusive. Without a job, her days are spent in a home where every crevice reminds her of son lost too soon. The support group that offers grace to her husband suffocates her. Since most attendees of the group lean on a sovereign creator, Becca’s atheistic tendencies alienate her from the group. Instead, Becca seeks reconciliation with the teenager whose car accidentally struck the fatal blow on the four-year-old child.

A Portrait of Suffering

Rabbit Hole focuses on the many facets of suffering. It can pull relationship apart and it can assist in pulling a couple back together. What is clearly depicted, though, is the singular and solitary nature of suffering in the wake of losing a child. This movie is by no means entertaining. Its weight sticks with you long after the credits roll.

Nevertheless, its perspective on suffering points me back to the year when I lost my sister. In some way, Rabbit Hole gives me an ever-so-slight look into the world my parents encountered after my sister passed.
In many ways, Rabbit Hole gives me evidence about the resolve my parents showed in those times. While many split under the pressure, my parents held strong, are happily married to this day, and raised two excellent children (as far as I can tell).
Rabbit Hole is well acted and well produced. However, one must approach it understanding the weight of its subject matter. If you know you have a soft spot for the suffering of a family, this movie might be too much to bear. However, if you are a fan of solid scripts, acting, and production, Rabbit Hole

is worth your time.