Motor Sports in the Blood

Whenever I feel the need to impress a new acquaintance, I often find myself telling stories of my dad and uncles. You see, my father (before he met my mother) raced hydroplanes. As a child, my dad would take me to the pits during Seafair and while I marveled at the loud engines and sleek boat frames, my dad would socialize with drivers, mechanics, and boat owners. 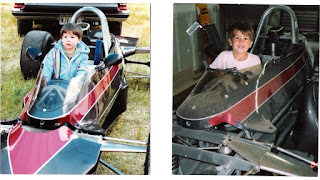 Both of my uncles to this day dabble in motor sports. Whether go-karts or open-wheeled Formula Four vehicles, my uncles have the need for speed. In fact, I fondly remember when my dad kept an uncle’s race care in the garage. There are pictures of me in the cockpit pretending that I am winning a grand prix.

Despite my family’s comprehensive history in motor sports and my early love for race (I collected matchbox cars as a kid), I never developed into the next generation of Richards racers. Credit my grandmother for exhibiting enough worry for the safety of her sons or my mother for convincing my father to get out of hydroplanes before he killed himself, but I never stepped foot in a competitive race.
With this history, I viewed Senna, the new documentary by award-winning filmmaker Asif Kapadia in a unique light.

Chronicling the quick rise to fame and premature death of three-time world champion, Ayrton Senna, Senna documents the serene faith of a driver who danced with death every time he strapped into a car and the film also exposes some of the politics that led to the fateful crash which took Senna’s life much too soon.
The product of an upper-middle-class Brazilian family, Senna expressed a love for race from an early age and his family promoted the hobby entering him in regional go-karting races. A prodigious talent, Senna quickly rose through the racing ranks and debuted in Formula One in 1984.
For those unaware of Formula One, the premier open-wheeled racing league in the world, the league operates in a team format with owners and engineers hiring the best drivers around the world. Each team develops cars with automobile manufacturers, with money and a certain set of safety regulations acting as the only fenceposts.
As such, the best funded teams typically find themselves on the winner’s podium. Imagine the shock of the old guard when Ayrton Senna began winning races on an underfunded and less-than-optimal machine.
As Senna became a mainstay in the league, he worked his way to McLaren-Honda as a teammate to Frenchman Alain Prost. In the next few years, Proust and Senna became bitter rivals despite their status as teammates. Having won three world championships, Senna moved to Williams-Renault in 1994 as the team had developed the fastest car in Formula One history.
Sadly, Senna never completed the year since he died in an unassisted crash during the 1994 San Marino Grand Prix.

Driving by God’s Assistance or a Dance with Death?

Senna’s driving style inspired many but also drew criticism. As the movie poetically depicts, Senna’s devout faith in God influenced the way he drove a race car. He waited longer before braking into a turn; he accelerated quicker out of a turn. For many, such a driving style teetered on the edge of human capability.

While watching the documentary, one can easily conclude that Senna dared drivers to block him and force an accident. Whenever a driver revealed even a sliver of space, Senna took it and demanded that the other driver back down lest both drivers crash.

Such a style drew harsh criticism from Senna’s arch-rival Alain Prost. In the movie, Prost claims that Senna’s belief in God allowed him to drive recklessly.
Meanwhile, the rise of computer technology allowed engineers to break the barriers of racing science. In the 1993 season, cars debuted with corrective technology allowing drivers to push the limits of speed without worry of losing control of the car.
As the 1994 season began, Formula One’s governing body decreed a ban on corrective computer technology which evened the playing field but also developed higher levels of danger with the speed of the cars.
With Senna’s driving style and the reckless regulations of Formula One, disaster would soon result. At the beginning of practice for the 1994 San Marino Grand Prix, the drivers knew a dangerous weekend would unfold when the young, up-and-coming driver, Rubens Barichello, missed a turn and found his car launched into guard rail. Shocked, bruised, yet ultimately healthy, Barichello escaped with his life.
A day later, however, another driver would not be so lucky. During the final qualifying run, Roland Ratzenberger lost control of his vehicle and crashed into the outside wall. With a basal skull fracture, Ratzenberger lost his life.
After two horrendous accidents, archival footage reveals a tense and visibly shaken Senna. Despite the danger, Senna qualified for the pole position and completed 6 laps before losing control and fatally crashing on lap 7.
Whether Senna’s reckless driving style ran out of luck or the increased technology added too much danger to the sport, the events at San Marino led to Formula One issuing a mea culpa and commissioning research on bringing safety to the sport.

The Unsettling Notion of Danger as Entertainment

As a film, Senna is informative, fast-paced, and heartbreaking. In many ways, despite the fact that I have never considered it; Senna’s death became the harbinger for my eventual phasing out of motor sports from my passions.
I love my family and I appreciate the talent it takes to safely win a race. Yet I find the danger of the sport hard to reconcile. Sadly, the car accident is one of the thrilling parts of a race. Just watch “Sportscenter”. You’ll see highlights of the checkered flag and all of the accidents that occurred during the race. Ultimately, I find such an occurrence unsettling and telling of human character. I loved motor sports, but I think I also loved the accidents too much. As such, I am glad that I never followed the footsteps of my father and uncles.
As for the film, Senna gorgeously compiles archival footage from Ayrton Senna’s life and creates a compelling narrative about the driver, his devout faith, and a broken organization. If you are interested in motor spots, you need to watch this movie. Even if you don’t care one way or another about the sport, Senna is informative, entertaining, heartbreaking, and worth your time.
Verdict: 5 out of 5
—
Posted by: Donovan Richards
Affiliate Links: