Film Review: The Tree of Life

The Tree of Life

Do you remember the last time you cried uncontrollably? In those moments when tears threaten to disrupt breathing patterns and life seems to change course, did you ask, “Why me?” Though circumstances differ from person to person, we all encounter these life altering and painful-to-the-bone scenarios. With Terrence Malick’s Palme d’Or-winning opus, The Tree of Life, such existential crises are exquisitely depicted on film.

As the movie commences, Job 38:4 flashes over a blank screen. In this biblical passage, God declares, “Where were you when I laid the foundation of the earth?” For those unfamiliar with this ancient Hebraic story, Job – a Godly man – encounters immense suffering as he loses his family and economic clout. Despite hollow encouragement from friends, Job questions his suffering.
In a slightly dismissive manner, God responds to Job’s inquisition in the previously mentioned passage. And with this background acting as the sole hint behind its nonlinear narrative, The Tree of Lifeunfolds.

Ambitiously attempting to portray the entire history of the universe alongside an account of one family in small-town America, Malick simultaneously presents both a universal and a microscopic point of reference. With scenes depicting the creation of the universe, Malick makes visible the actions of God laying the foundation of the earth (extra kudos for a leviathan reference too). Likewise, The Tree of Life is imminently particular as Jack (played by Sean Penn in adulthood) reminisces about childhood and questions why the death of a family member was necessary.
As Jack remembers his childhood, his parents – Mrs. O’Brien (Jessica Chastain) and Mr. O’Brien (Brad Pitt) – illustrate the conflicting realities of grace and human nature as they attempt to teach, nurture, and develop their children. With a loving but heavy hand, Mr. O’Brien demands respect of his children. With quiet expectation, Mrs. O’Brien urges her children to blossom.

During perhaps the most moving section of the movie, Jack and his siblings evolve from the innocent purity of early childhood to the mischievous curiosity of childhood. Jack develops a goading sense of authority. In one scene, he challenges his brother to lick his finger and put it in a lamp socket. Without a resulting shock, the younger brother declares, “I trust you.” Moments later, Jack takes advantage of this trust by convincing his brother to put his finger over the barrel of a BB gun.  In the instant after Jack pulls the trigger, his brother’s look of shock, sadness, betrayal, and pain pours over the screen. Such actions leave the viewer enraged but also implicitly involved in this treachery. At the end of the scene, it feels like humanity is incapable of acting in a noble and just manner.

A Film of Contrast 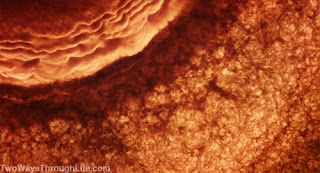 This film, told in a stream of consciousness narrative, juxtaposes conflicting ideals. Through universality and particularity, nature versus grace, and innocent beauty next to tainted imperfection, The Tree of Life brilliantly depicts the ancient themes of Job where God seemingly permits purity, love, and uprightness to exist side by side with the reality of evil.
The Tree of Life is not for everyone. It’s unclear narrative format and artistic focus requires attentive viewing and an acceptance of ambiguity. Let’s be honest; it’s an art film. However, The Tree of Life is exponentially more accessible than many films that frequent the film festival circuit. Additionally, my review has only scratched the surface of this movie. If you are interested in deeper takes, please direct your browsers to these fantastic reviews at Biblioklept and ThinkChristian. In short, I highly recommend The Tree of Life