Musical Review: How to Succeed in Business without Really Trying

For those unaware, my wife and I recently returned from a trip to New York. I had the opportunity to present a paper at an international business ethics conference and we spent some time afterward “vacationing.”
If I had to pick one unanimous piece of advice given by those who have traveled to New York before us, it would be “see a Broadway show.” Since tickets cost an arm and a leg, Tara and I waited in line at TKTS, a discount ticket provider, hoping to get tickets to practically anything. My first choice, The Book of Mormon, is, and will be, sold out forever. Our second choice, however, was How to Succeed in Business without Really Trying. By the luck of the draw, we found tickets, front row center.

How to Succeed in Business without Really Trying

A musical comedy, How to Succeed in Business without Really Trying satirically tells the story of J. Pierrepont Finch (Daniel Radcliffe), a young window cleaner from New York with loads of ambition. Guided by a DIY book with the same title as the play, Finch strolls into the World Wide Wicket Company searching for a job. With a little luck, Finch bumps into J.B. Biggley (John Larroquette), president of the company. Despite a prompt dismissal from Biggley, Finch uses Biggley’s name to sway the hiring manager and gain entry into the company through a job in the mailroom. 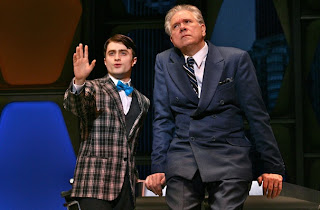 With a mind to climb the corporate ladder, Finch gains a confidant and eventual love interest in secretary, Rosemary Pilkington (Rose Hemingway) and an enemy in Mr. Biggley’s lazy nephew, Bud Frump (Christopher J. Hanke).
As the musical unfolds, Finch comically interacts with characters and becomes a metaphor for the laissez-faire mindset of climbing the corporate ladder.