You’ve assuredly heard the story before. Man gets divorced, wife hates him, and son has the sarcastic and sardonic wit of a 45 year-old. He works a dead end job at a computer store, all the while unaware that he is a failure. Or, maybe you haven’t heard the story.
Created by writer Simeon Goulden, Spy is a new brand of television. It was created explicitly to be aired on the BBC digital-only channel, Sky 1. The resulting Hulu release in America is the American response to the innovation.

The basic premise of the television series is that of a silly spy spoof. Tim (Darren Boyd) is a single father that has a semi-evil and brilliant son named Marcus (Jude Wright). Tim is fairly boring, and has a penchant for Sudoku puzzles.
Tim, an under-achieving divorcee, accidentally stumbles into a job with MI5 after going to the job center. Now with the ability to hold a gun and be a part of Her Majesty’s Secret Service, Tim is suddenly insidiously  cool. What’s more, his boss (Robert Lindsay), completely unhinged from reality, reminds the viewer of the guy from the Dos Equis commercials.

Tim’s best friend, Chris (Matthew Baynton) is the only one in the “outside world” who knows of Tim’s accidental fortune in taking a job at MI-5. So, sadly, Tim is unable to tell his son Marcus of his cool job. He has to deal with his son at home, who constantly judges Tim for his poor intellect, lack of financial fortune, and lack of quality employ. 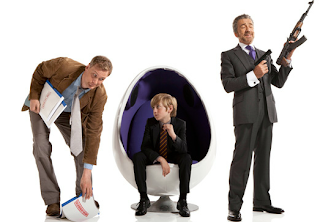 For further misfortune, Tim has to meet up with Marcus, his former wife Judith (Dolly Wells), and her new partner Philip (Tom Goodman-Hill), who is the headmaster of the school Marcus attends, for frequent counseling sessions. Philip, for some strange reason, absolutely loves hugging Tim in a far-too-close-for-comfort sort of a way. The therapist, Paula (Rosie Cavaliero) has also developed a major crush on Tim in stalker-like fashion.

With total absurdity, the show doesn’t disappoint. Lindsay is absolutely hilarious as the boss, and Jude Wright plays a great demonic mastermind of a son. The whole show is a delight to watch, which only shows that absurd British wit will always entertain. The good news is BCC has renewed Spy for a second series, as well as a Christmas special.  I recommend you check Spy out very soon.
Verdict: 4.5 out of 5
What do you think? Do you enjoy the series? Why? Share your thoughts below.
—
Posted by: Andrew Jacobson