Partly because I’m currently engaged in some lengthy books and need to post some content, I am reviewing the current season of The Walking Dead despite the fact that it is early in its second season.
As I mentioned in my review of the show last year, I am not a fan of the zombie genre. Yet, the more I consider the subtext beneath these post-apocalyptic narratives, the more the genre fascinates me. 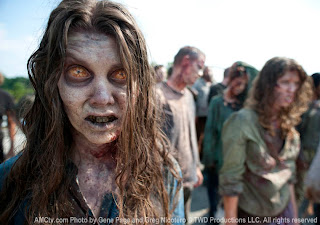 At its core, a zombie story explores human frailty. The zombie functions as a metaphor for the inevitability of death. Like a contagion, the threat gradually rises until no hope remains for escape. In other words, the zombie genre requires the viewer to encounter his or her own death.
In movie form, zombie stories move quickly with boatloads of action before the narrative resolves in the finality of death. The Walking Dead, however, must unfold slowly due to its serialized nature. As such, a sensory assault seen in most zombie movies would drain the viewer.  With a show format, The Walking Dead needs drama in order to break up the intense zombie scenes.

I Want to Like the Characters before They Die!

And, honestly, this drama is the Achilles’ heel of the show so far. Of course, in light of a dying world, it is nearly impossible to imagine the ways in which humans would cope. But, the attempts to humanize the characters in this show sound hollow. In truth, I am not drawn to any of the characters on this show.  As these people die (and we know they will, let us not deceive ourselves), I want to like them. Stated differently, it is not dramatic if unlikable characters die.
So, despite high ratings and much promise, I find it difficult to give The Walking Dead, a perfect score. The show has promise. In the third episode, we find the kind of cliffhanger that creates real characters. If you love zombies, you need to watch The Walking Dead. As for me, I continue to watch hoping that the writers put everything together.
Verdict: 3 of 5